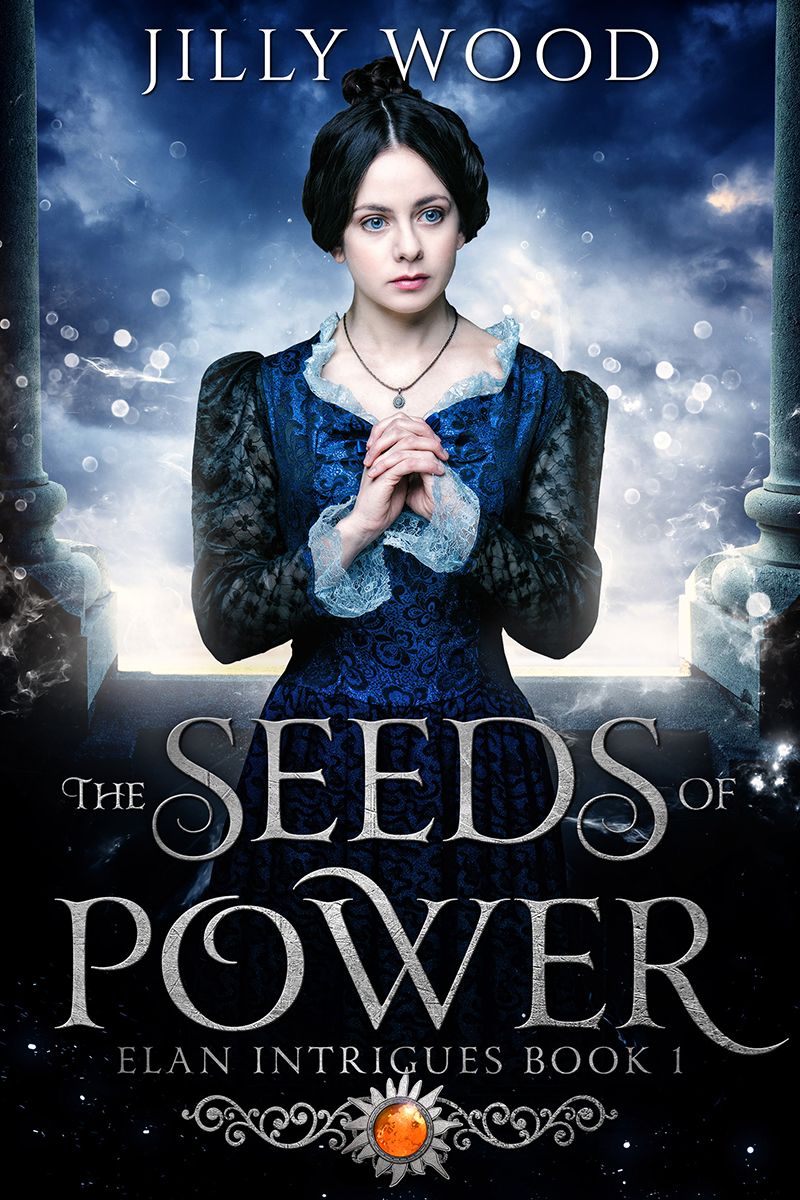 Christal Hollin, princess of Larrochar, learned long ago that to marry was to risk her life. At twenty-eight she’s resolutely unwed,  trusted assistant to the King’s Cultivator and an expert in rare plants. Then, to her horror, she receives a marriage proposal she can’t refuse. All Prince Daire of Caldermor cares about is elan–the mysterious golden beans that bring his family untold wealth and power. If Daire wants Christal, elan must be at the root of his interest.

Christal’s father would sacrifice her to discover elan’s secrets. The Calderrans would kill to keep them secure.  To save herself Christal will need every kernel of knowledge she’s ever gleaned. And the support of Kiran Randsen, elite soldier turned Calderran bodyguard, who may be something even rarer than elan—a man she’d trust with her life.

Princess Christal Betany Iris Hollin of Larrochar had been schooled from childhood always to put her royal duty before her personal wishes. On this evening, the first of the five-day Summersnight festivities, she was making full use of her lessons. She didn’t tap her satin-slippered feet impatiently on the bare stone floor of the Great Hall of Larroch Fort. She didn’t gather and crush her blue silk skirts with her gloved hands. But she wanted to.

Outside in the fields, the growing season was at its peak. The daylight lasted until long after suppertime, and her aunt Nessa, the King’s Cultivator, was at Brewer’s Farm, dealing with a blight in the alebarley. Christal’s fourteen-year-old niece, Ysolde, was helping, but Christal was Nessa’s apprentice and eventual successor. She should be there.

Instead, she was trussed up in her finest dress, condemned to waste her evening on false gaiety because Papa was determined to show every courtesy to their guest of honor, the princess dowager of neighboring Caldermor. Doubtless Papa saw Princess Irmine’s visit as a rare opportunity to query her about elan, the mysterious golden bean-shaped curative that brought Caldermor such wealth.

The Calderran elan monopoly chafed Papa worse than a saddle sore, as Christal could attest. She’d spent a decade trying to transform ordinary beans into elan for Larrochar. Used every bean she could grow, tried every trick in her cultivator’s notebooks, to no avail. The Edevald dynasty had kept the secret of elan for fifteen generations. It would take more than a few days’ hospitality to prize it from them.

Most frustrating of all, Princess Irmine was delayed. Likely she wouldn’t arrive for another two days. In her place she’d sent her twenty-one-year-old son and heir, a spoiled royal Christal’s papa referred to privately as the Pointless Princeling.

Prince Daire Edevald currently occupied the center of the floor, joining the men in the Hunters’ Reel. He looked as out of place as a maypole in a spear rack. The young prince stood as tall as any Larroch, but he was slender where they were broad shouldered, golden-haired where they were dark. The men of the Larroch court wore plain black from their collars to their boots, relieved only by a fine line of silver piping on the seams. The prince’s clothes were red-brown silk embellished with gold thread, and when he moved, a rich amber jewel shone gaudily from his bare midriff.

Where her kinsmen’s movements were controlled, athletic, powerful, Prince Daire’s were exuberant. When he clapped, he swung his arms wide and crashed his hands together. When he spun, he opened his shoulders and leaned his head back, making his unruly tangle of fair curls lift and swing. He smiled constantly for no reason. He whooped. He was a dozen years younger than her eldest brother; it seemed like a score.

Daire Edevald put Christal in mind of a linden sapling: handsome and limber but requiring the richest soil to feed its vigorous growth while offering nothing in return but pleasant shade and fragrant blossoms.

Typical Calderran. In Larrochar they required a better yield from their acres.

“Such a beautiful boy.” One of Mama’s ladies stole a sideways glance at Christal.

Christal smiled in lieu of a reply. She had no way to measure the truth of the observation. There were no boys in Larrochar, only men in the making.

The Hunters’ Reel ended with a rousing heel stamp and she joined the ladies in polite applause. Next, her parents would dance the doublestep, a stylized dance that symbolized a warrior’s taming of a wild mare, accompanied by a solitary piper. After that, the ladies and gentlemen would mingle, and she’d sneak away to the fields, where she belonged.

The bugle rang out in a fanfare. Her papa descended from his carved seat, but instead of offering his arm to her mama—what on the gods’ bounteous earth?—he held out his hands to Prince Daire in an invitation to take his place and lead the dance.

It wasn’t merely a compliment. It was a signal. Confirmation of a deal done, a pact sealed.

Caldermor was wealthy, powerful, and capricious. The princess dowager didn’t form alliances. She sat in her walled city, dictated her terms, and the world rushed to obey. Papa had to scrape and scheme every day just to secure his borders.

Papa wanted elan, that was clear. What could Princess Irmine possibly want from Larrochar?

Prince Daire bowed to Papa, bending so low his mop of curls almost brushed the floor. A murmur of speculation from the assembled courtiers grew to an indecorous gabble. It was only when the prince straightened and turned the full glory of his midday-sun smile toward Christal that she realized what everyone else in the court had already deduced.

“Princess. Would you please join me…?”

No! The word caught in her throat, lodged like a sticky burdock burr. This couldn’t possibly mean what it looked like. She had fought off being married at fourteen and spent as long again proving her value as a cultivator. She’d earned her independence.

Her sister’s legacy required it of her. Yarrow’s brief, violent marriage and untimely death had left a motherless daughter who flinched at every raised voice. Even if Christal had to defy Papa, her duty was to raise and protect Ysolde, not to follow her sister into an early grave.

Even her slight hesitation was impossibly rude, but Daire Edevald didn’t notice. He stepped forward, took her hands, and bent to sweep his lips over them. Another ripple passed around the room.

“You seem surprised, lady. Were you not expecting me to choose you as my partner?”

Prince Daire’s confident words killed any lingering doubt. In the princess dowager’s absence, dancing the royal doublestep with Caldermor’s crown prince would be the courtly equivalent to a betrothal announcement.

The taste of panic soured her mouth. She swallowed it down until it settled deep in her stomach, fermenting like spoiled beer.

Papa planned to marry her off, for her to be rutted upon by the Pointless Princeling and to live—or die—at the whim of Princess Irmine. Papa hadn’t forewarned her, because he knew she’d have found a way to avoid this moment. She’d be at Brewer’s Farm with Nessa, or even farther away, ideally several days’ ride from the fort.

If she allowed herself to be brought to Daire Edevald’s hand and taught to gallop and trot at his command in front of the whole court, she might as well start work on her bride clothes.

Somehow she had to extract herself from this dance.

She dipped her knee to her swaggering suitor. “Your attentions are unexpected, sir.”

“Really?” Daire’s fair brows met momentarily before his forehead cleared. “No matter. I shall teach you to enjoy them.”

Just as if she really were a mare, to be tamed and schooled.

The court formed a circle around the edge of the hall. He led her to its center. The Royal Piper began to play. Christal returned Prince Daire’s bow as form dictated, then backed away to the farthest limit of the circle before he could say another word.

The air began, slow and measured. She walked the perimeter, first clockwise and then counterclockwise. The prince remained at the center but pivoted on his heel, keeping his face to her as she walked. She watched him out of the corner of her eye, feeling as trapped as any mare in a pen.

The piper picked up the pace. Prince Daire began to move outward in a slow spiral, tracking her progress, closing the distance between them. His royal birth had deprived the world of a consummate actor. He embellished the simple steps until they were almost unrecognizable.

He raised a hand to her in invitation, enticing her.

The doublestep required Christal to edge toward him. Not in this lifetime.

He called out endearments, urging her to come closer. She set her teeth and held her position, staring straight ahead, forcing him to take bigger steps toward her instead.

Two more long strides and he’d catch her in a formal hold. Then he’d be in control.

The piper sped up again. Prince Daire’s gaze locked on the movements of her hands and arms. He measured his steps so he could time his capture of her to match the phrasing of the music.